Introducing products we sell as an authorized distributor 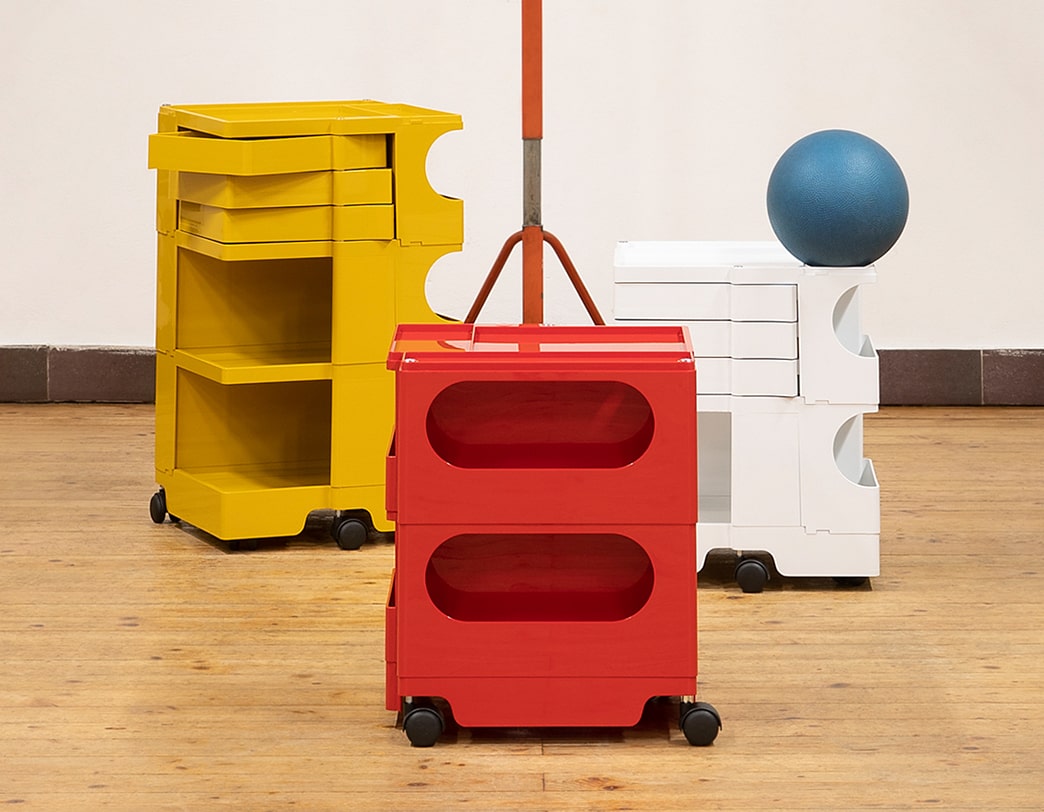 Immensely popular all over the world since it was designed over50 years ago, and part of MoMA’s permanent collection, The Boby Wagon is design classic. With variable colors and sizes, this multi-use trolley can be used in workspaces, living room or kitchens, among other spaces. 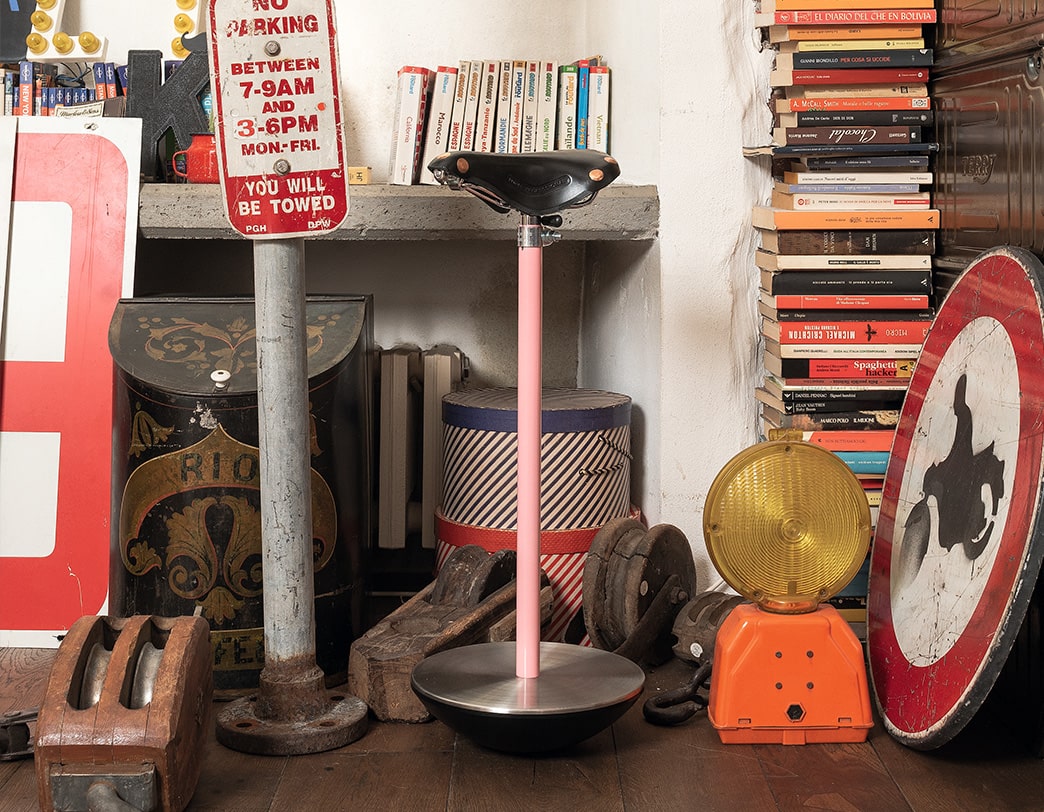 Designed by brothers Achille and Pier Giacomo Castiglioni in 1957 as a “telephone stool,” the Sella symbolizes the Zanotta brand, the foundation of Italy’s design culture. The stool comprises an actual racing bicycle saddle attached to a stainless-steel pole supported by a weighted hemispherical base, incorporating concepts positioned halfway between “ready-made” and “Dadaism.” 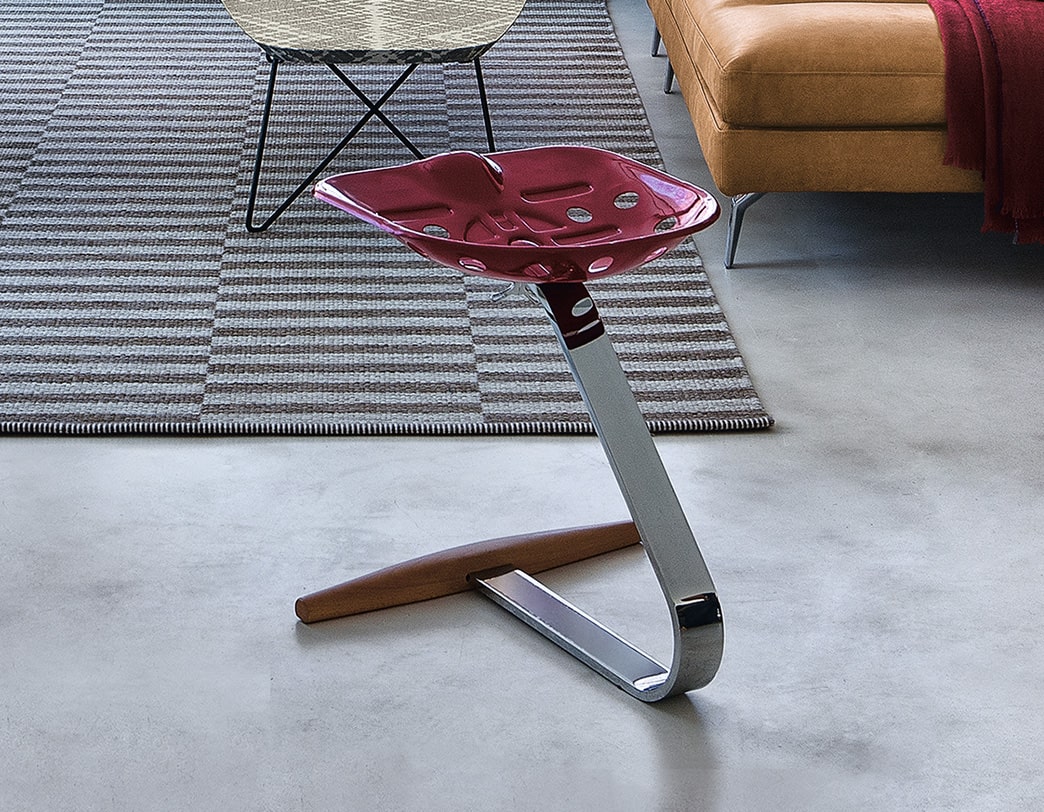 Designed by brothers Achille and Pier Giacomo Castiglioni in 1957, this stool incorporates the “ready-made” concept. The design combines existing elements—a style of tractor seat used at that time, a racing bicycle pin, a steel crossbow, and a sailboat crossbar. The name “Mezzadro” means “peasant” and was chosen in recognition of the stool design’s ironic incorporation of the symbolic elements of impoverished laborers. 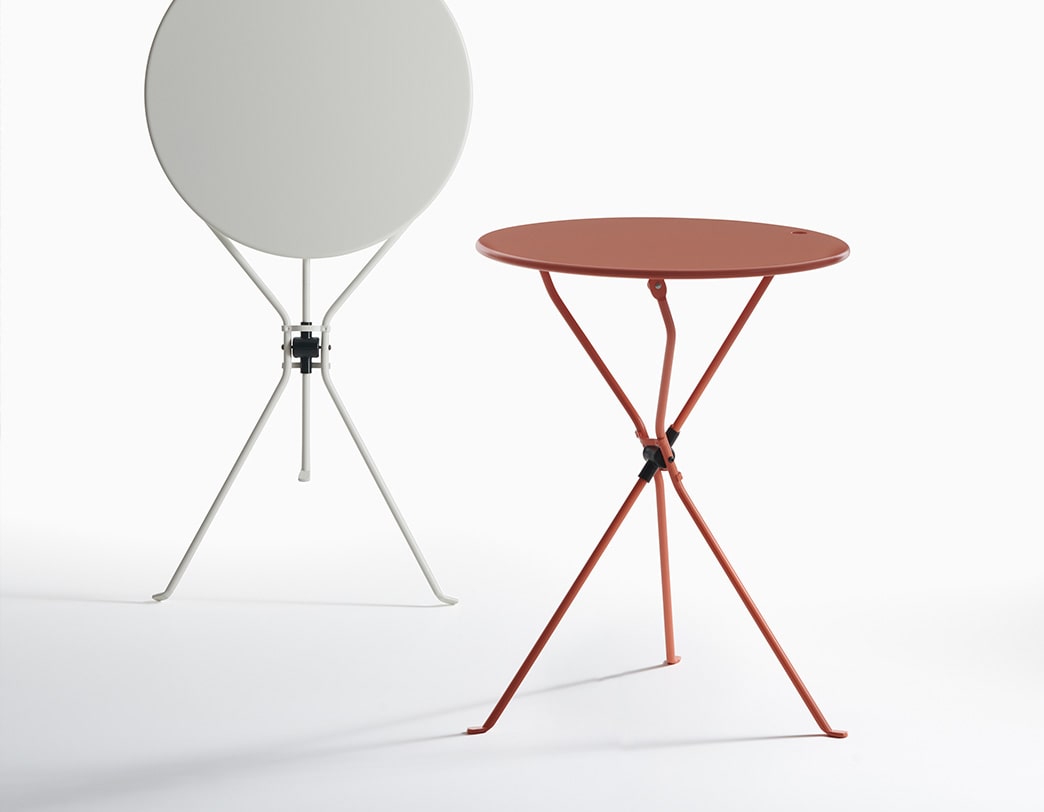 This folding table was designed by Achille Castiglioni in 1978. Reinterpreting the three-legged tables commonly used in Parisian bistros, Castiglioni strengthened the design’s functionality. Using ABS resin—then a new material—for the joints greatly enhances the table’s opening/closing capability. The hole in the tabletop can be used not only when folding up the table but also to hang it on a wall using the hook provided. The Cumano received the Compasso d’Oro industrial design award in 1981. 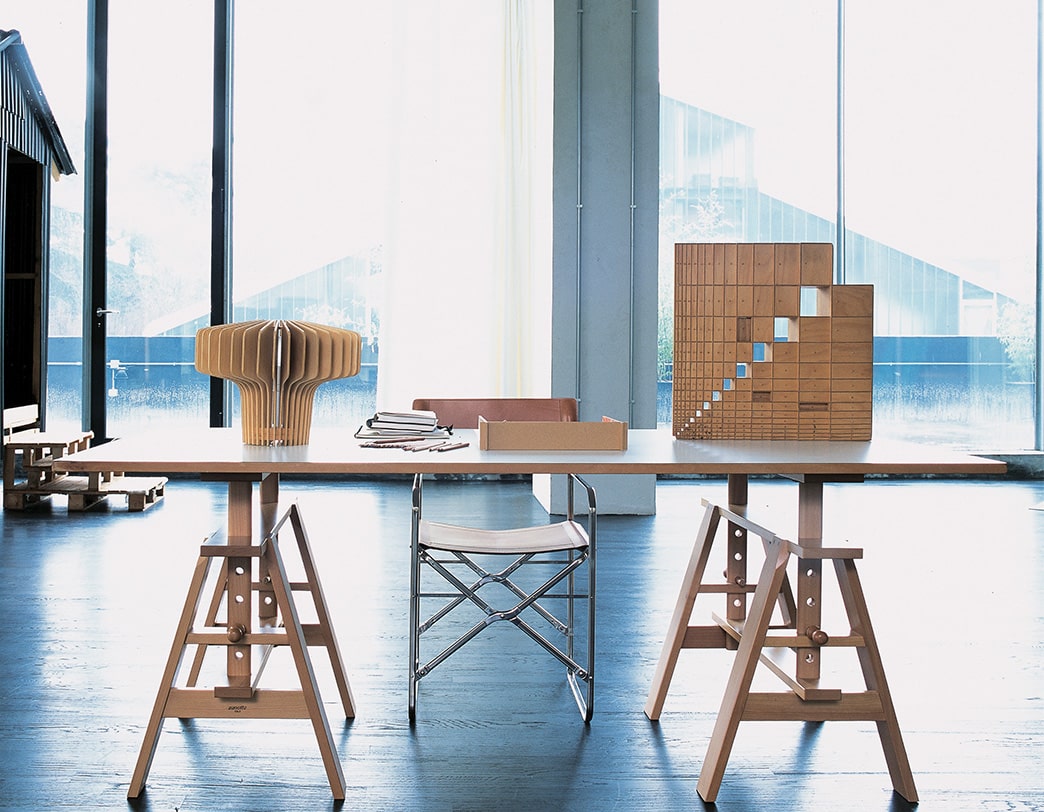 This worktable was designed by Achille Castiglioni in 1969. Featuring a simple structure comprising height-adjustable legs and a tabletop, this design is said to be the prototype for today’s trestle tables. Castiglioni’s idea for the legs came from the sawhorses that had been in general use since he was a child in addition to the structure of carpenters’ benches. 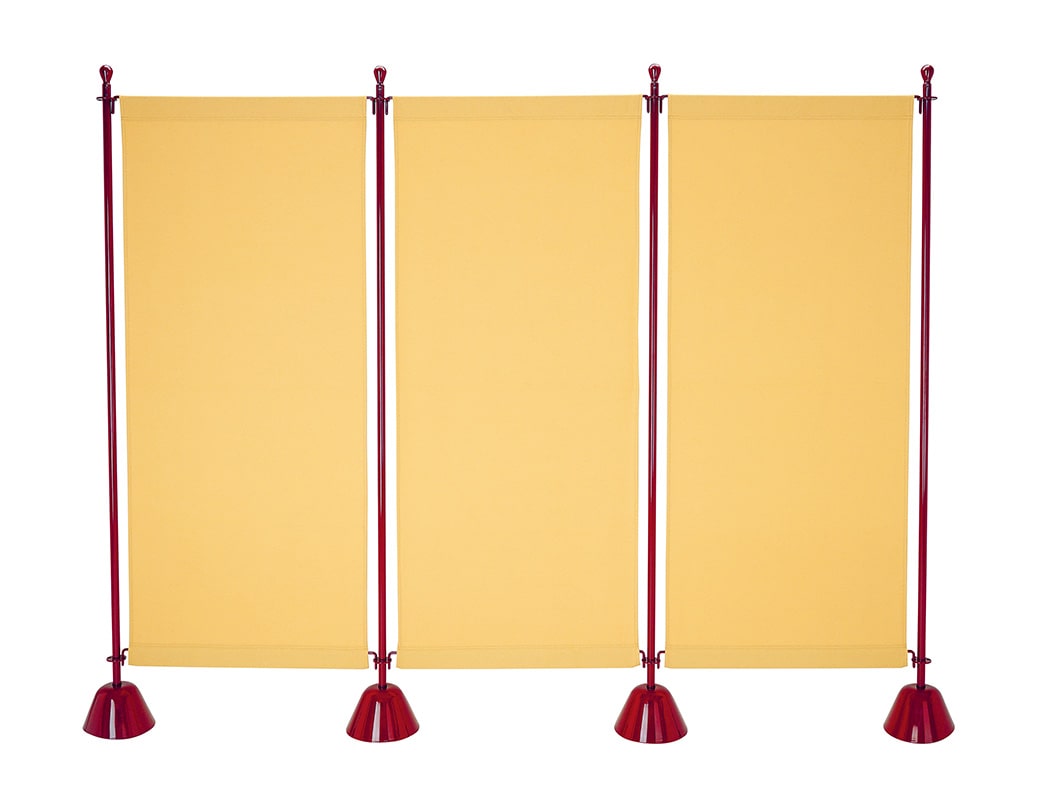 This screen was devised by brothers Achille and Pier Giacomo Castiglioni in 1986. It was designed as a detachable module system that is also suitable for “serving” in public spaces. A range of screen variations have been created through the combination of polypropylene bases and metal poles in different heights. 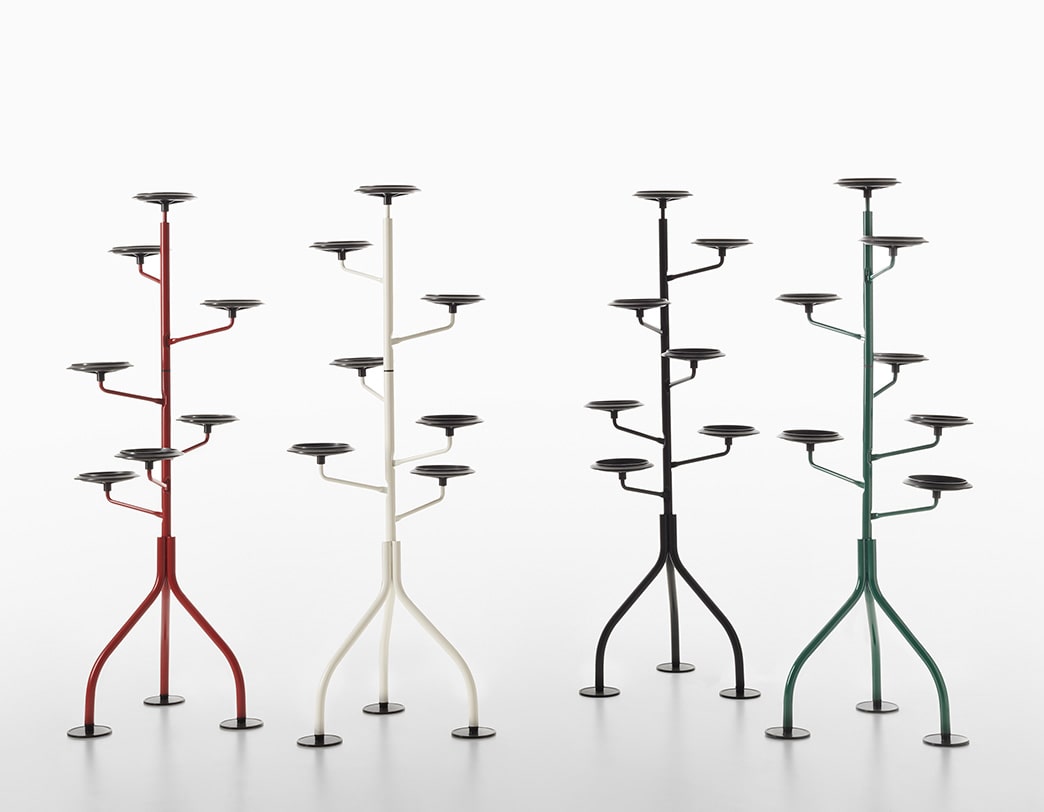 Featuring both dynamic composition and flexible design, this flowerpot stand was designed by Achille Castiglioni in 1983. Flowerpots can be arranged rhythmically on the various plates supporting them, giving the appearance of a tree growing straight upwards and cradling the pots in its hands. Because each plate can be rotated 120 degrees horizontally, the potted plants can all receive ample sunlight even if they vary in size. 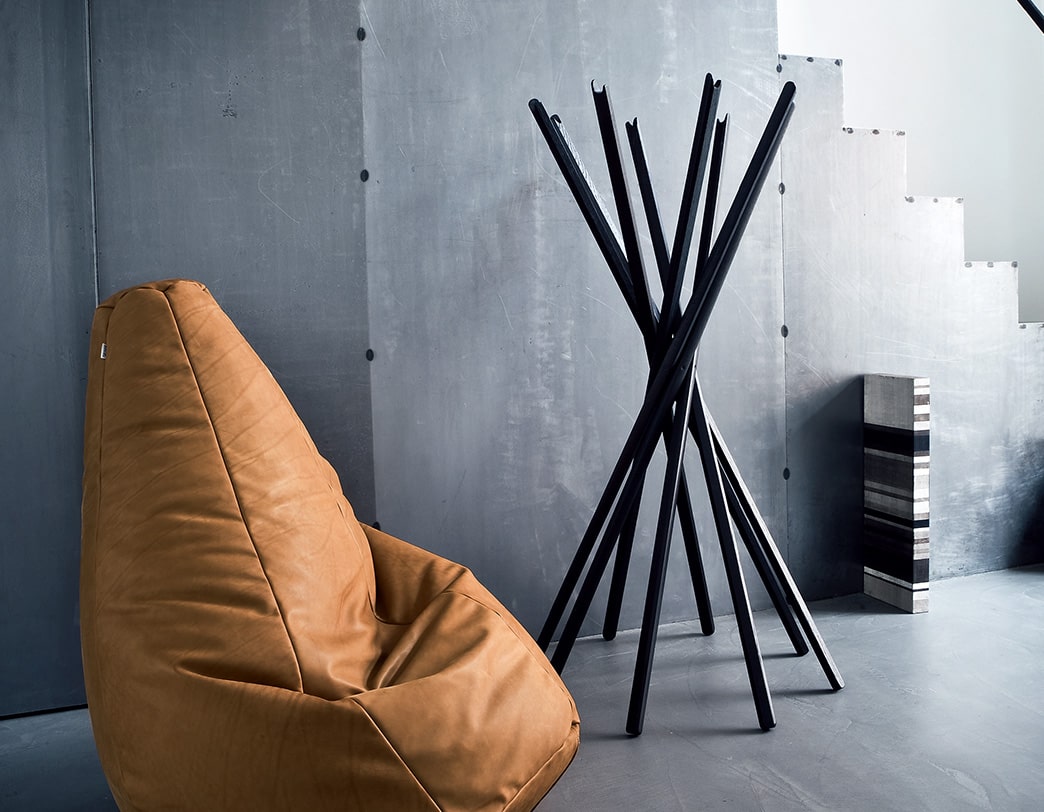 This folding clothes stand was designed by Gionatan De Pas, Donato D’Urbino, and Paolo Lomaggi in 1973. Joining eight wooden poles together at a position slightly above their centers broadens the surface area of the clothes stand in contact with the floor, creating a more stable structure. The product’s simple yet sophisticated structure has won high recognition, receiving the Compasso d’Oro industrial design award in 1979. 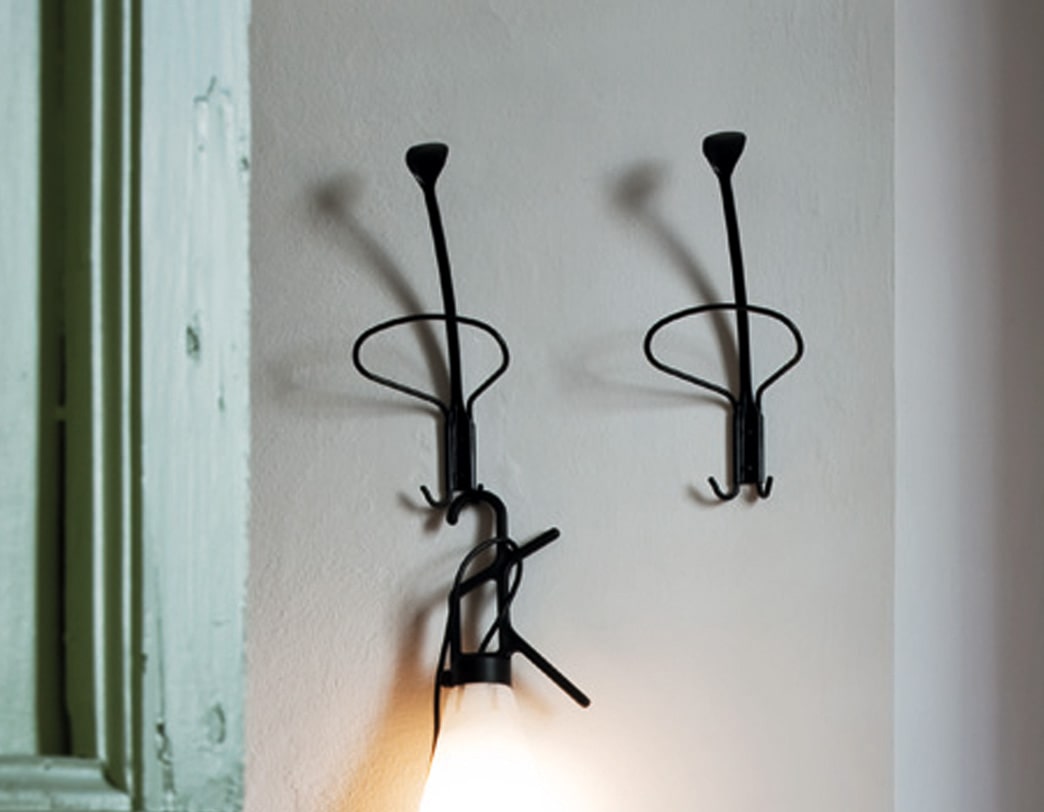 Designed by Enzo Mari in 1991, this coat hanger was born out of the joint objective of Enzo Mari and Zanotta to produce products that can be used for a long time, products that last over generations unaffected by changing fashion trends due to their emphasis on simple designs and special functions, and products that are not experimental but rather do not create unreasonable challenges within the production process. In contrast to the many dynamic designs utilizing color and shape freely that were being created at that time, this product’s static, sophisticated design provided new value. 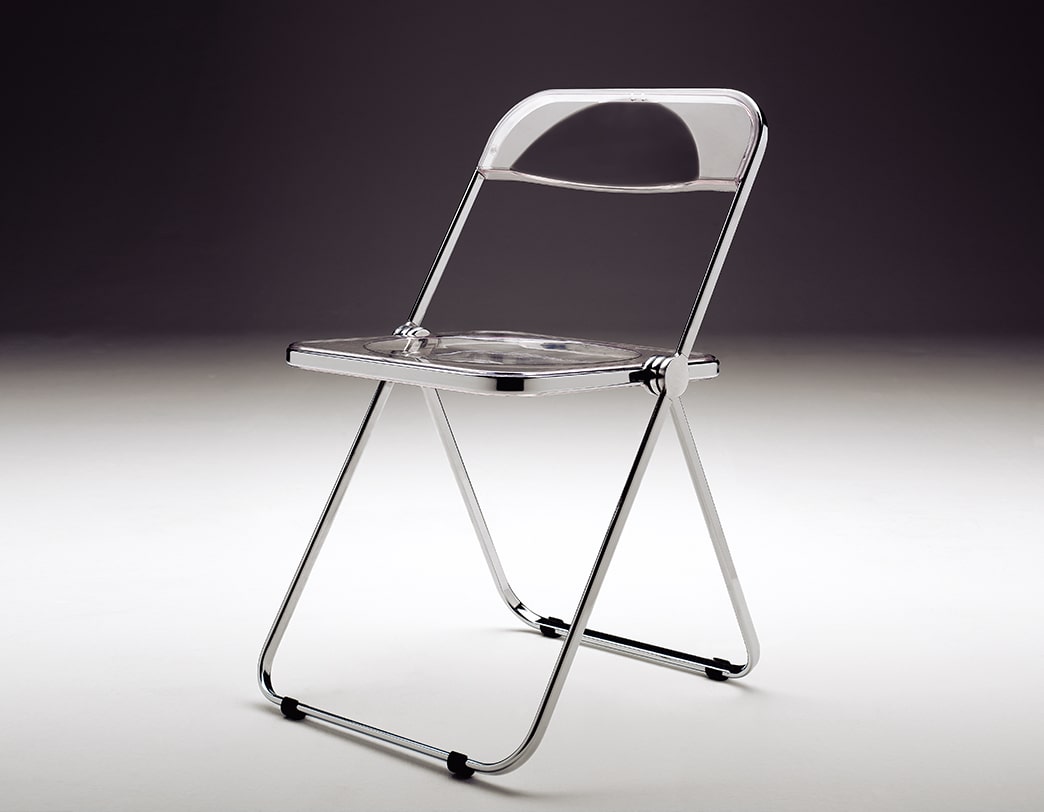 Designed by Giancarlo Piretti, this stackable folding side chair is characterized by its structure, which enables the chair to fold up using only parts located on the left- and right-hand sides of the seat. It provided the model for present-day folding chairs. Since 1969, more than seven million Plia Chairs have been sold worldwide due to the functionality and translucent beauty of its design. Plia Chairs have been included in the MoMA collection and have received numerous awards. 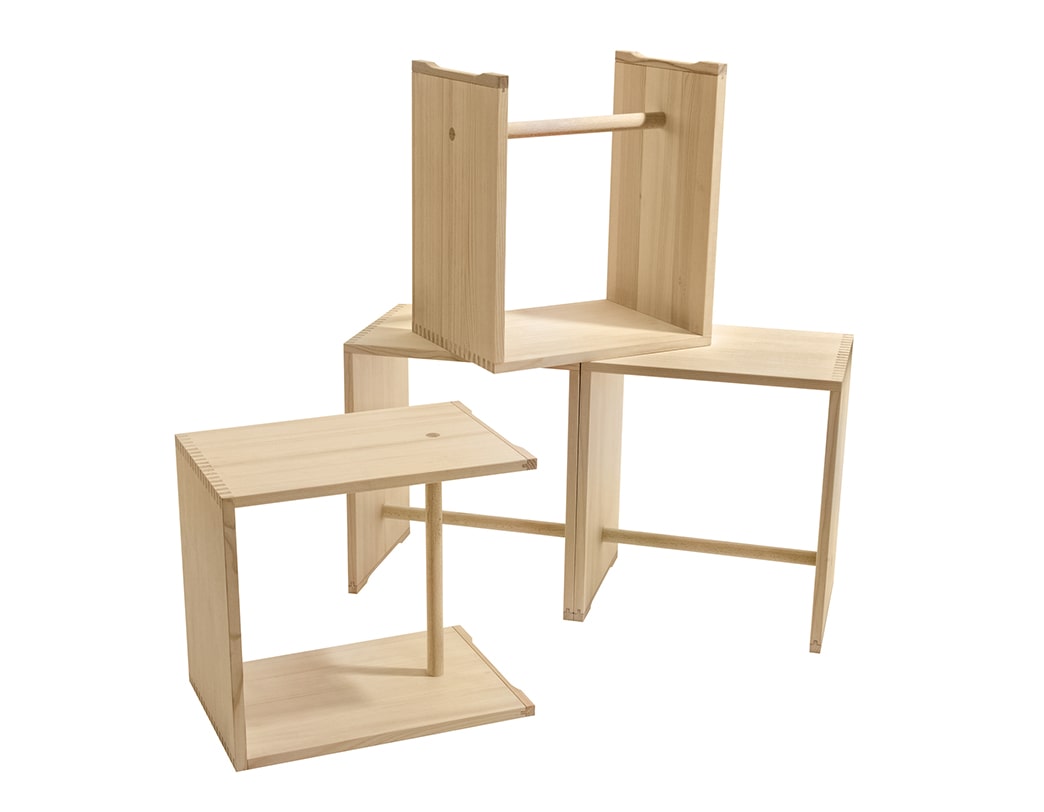 This stool was originally designed for the students in Ulm School of Design. It is multi functional that one can use the stool not only as a chair but also as a side table, a shelf or a carrying case. Ulm stool is the symbolic item of Bauhaus’s functionalistic concept. 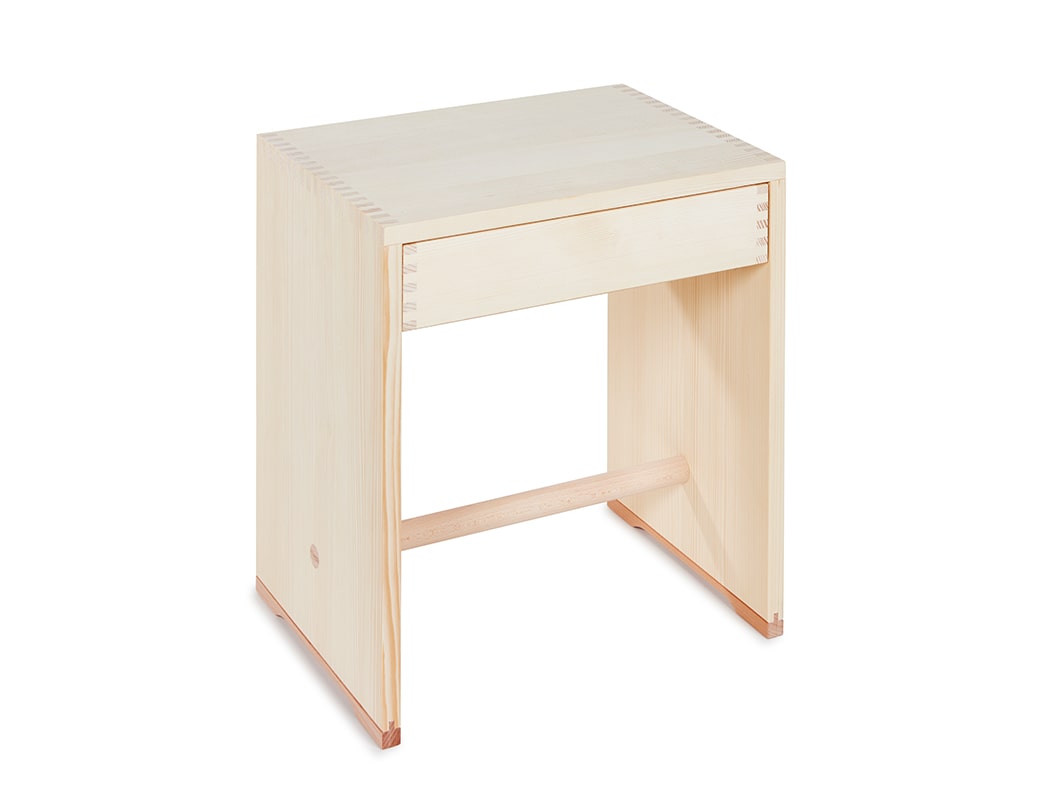 This “Ulm Stool”—a style of furniture that symbolizes the Bauhaus philosophy—is a model featuring a drawer. The stool’s simple form, materials, and assembly without nails enable it to be used flexibly within everyday life, making it highly practical. 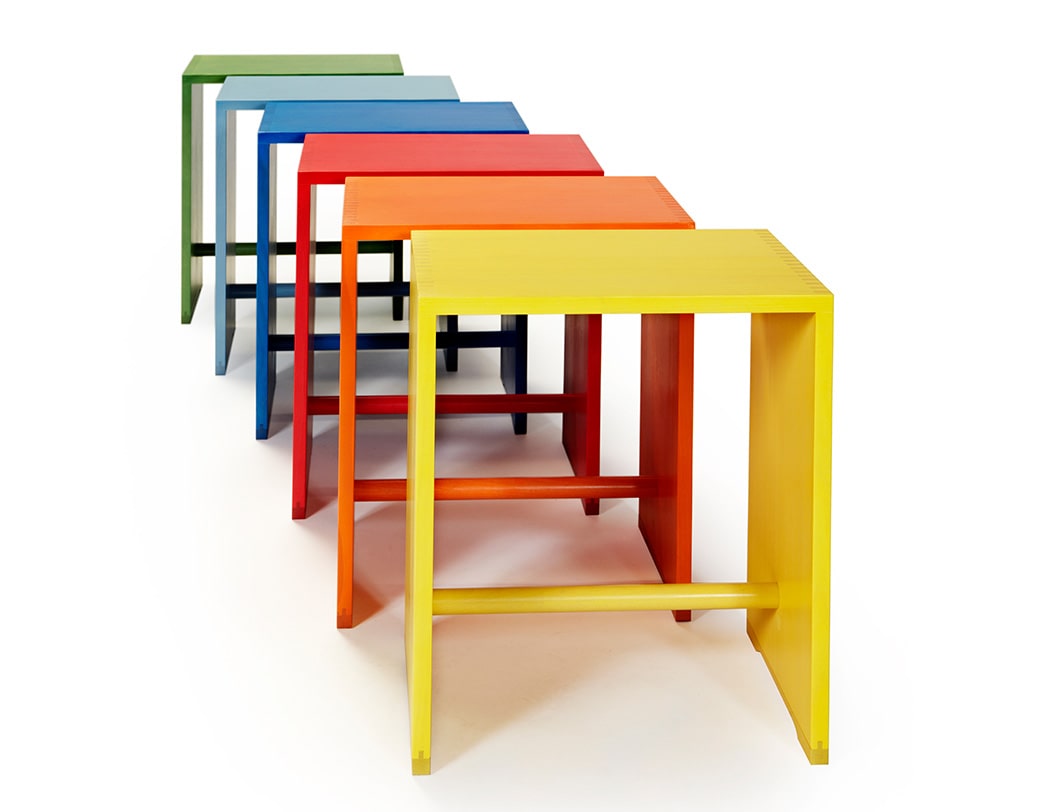 This “Ulm Stool”—a style of furniture that symbolizes the Bauhaus philosophy—is a model featuring color. Unlike the regular model, which uses unpainted natural spruce wood, this Ulm Stool is made using scratch-resistant natural birch wood. After the wood is dyed so as to highlight the grain, the stool is finished with a clear coat of urethane. 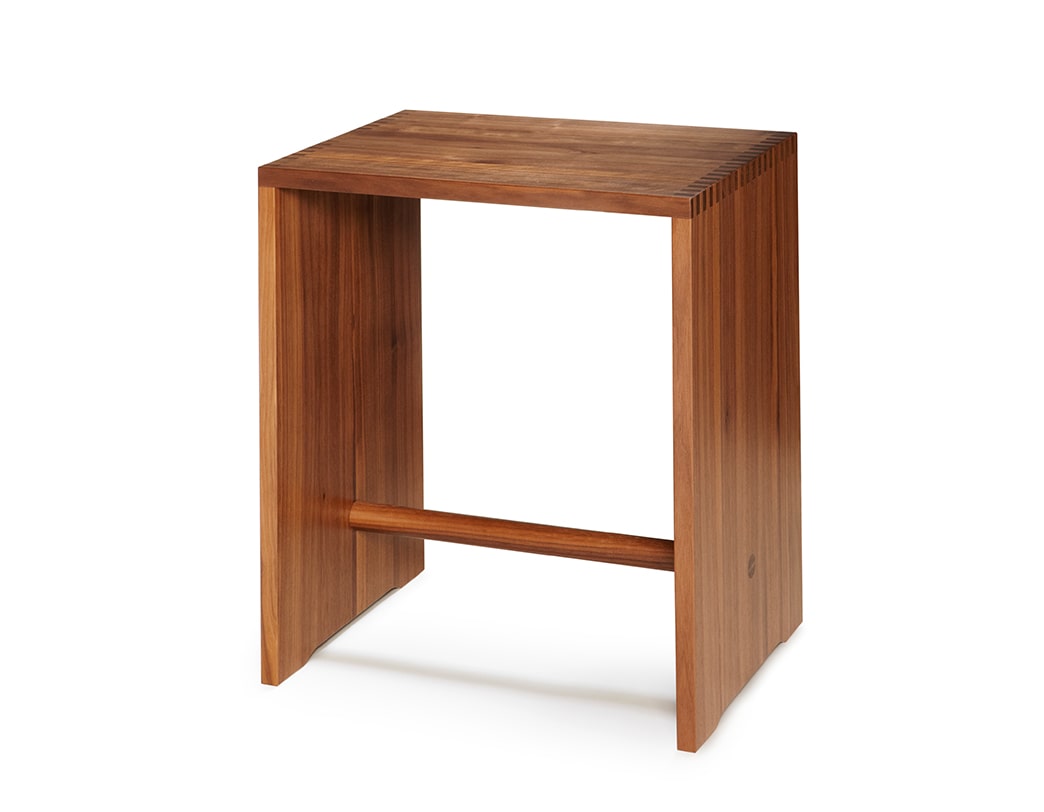 This “Ulm Stool”—a style of furniture that symbolizes the Bauhaus philosophy—is a model featuring walnut wood. Unlike the regular and colored models, all of the parts of this Ulm Stool are made from walnut materials, creating a luxurious finish that accentuates the beauty of walnut tree texture. 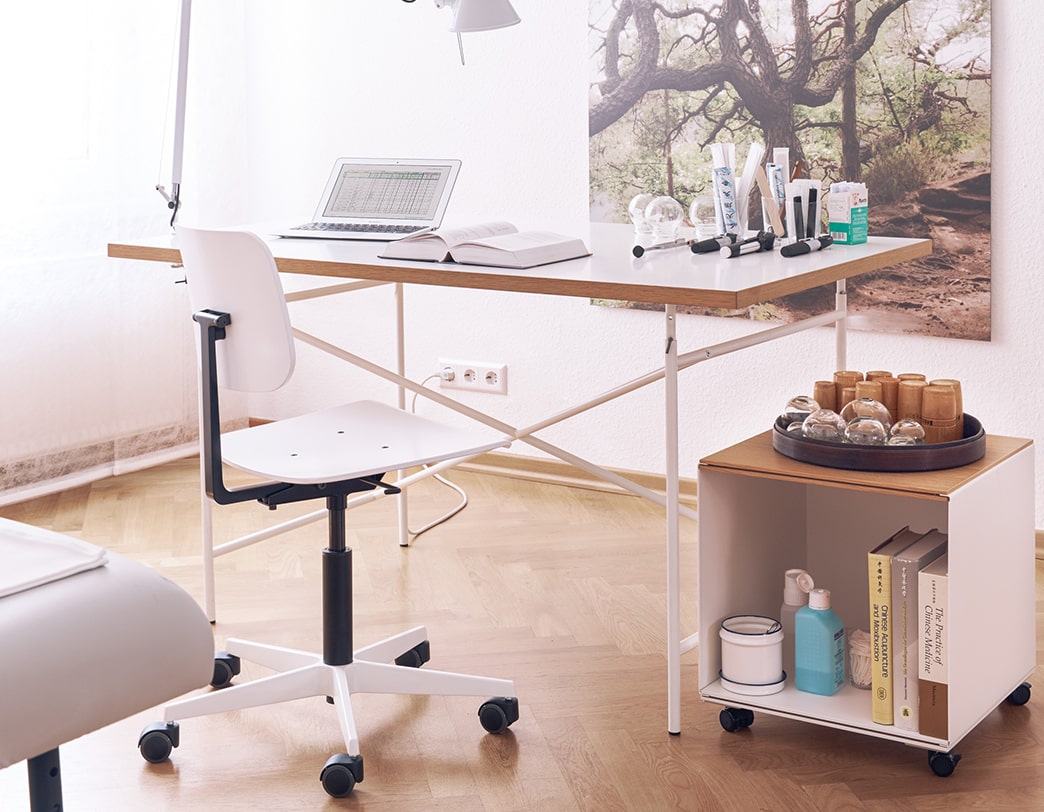 This table was designed for Eiermann’s own studio. Being composed of steel frames and the table top just put on, it has minimal and lean style. This is one of Eiermann’s tables for which he gives special attention to every details. 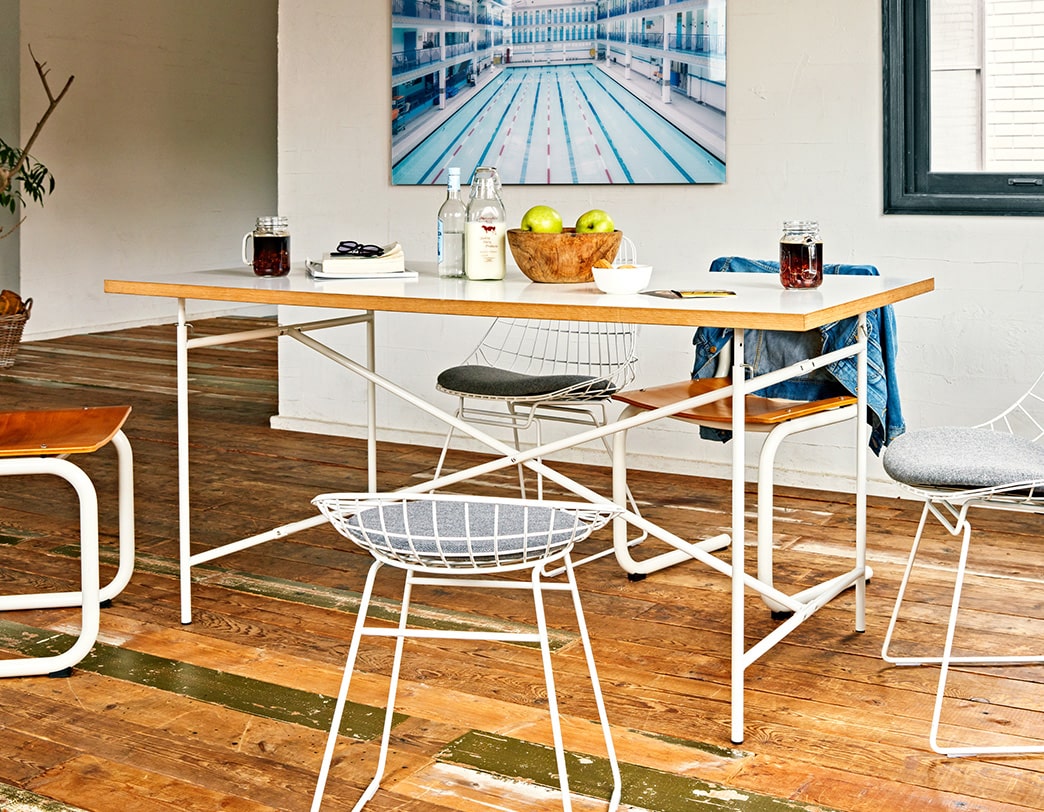 This table is a redesign of the Eiermann Table. Compared to the original design, the inner width of the frame is 220mm wider. The dining table for sitting side by side or facing one another. 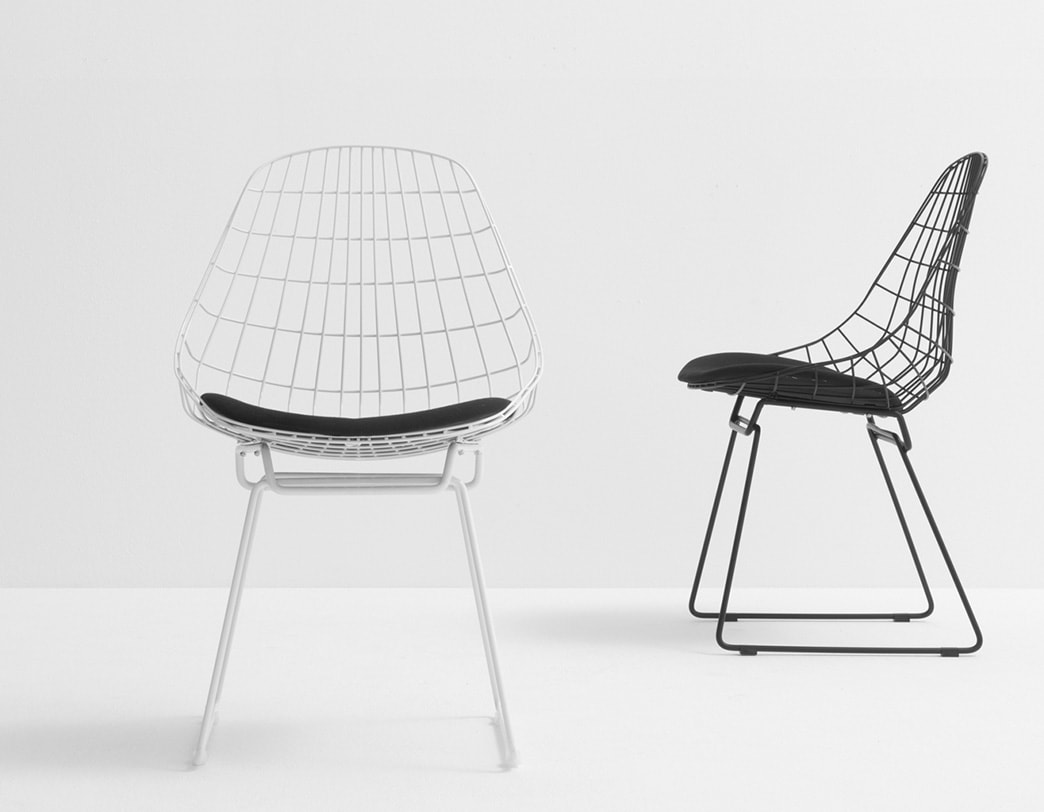 This Wire Chair was released in 1958 by Cees Braakman, one of Netherlands’ most famous designers, after being influenced by the work of Charles and Ray Eames. Although the series was once discontinued, the production re-commenced in 2011 due to a call of re-evaluation for it. 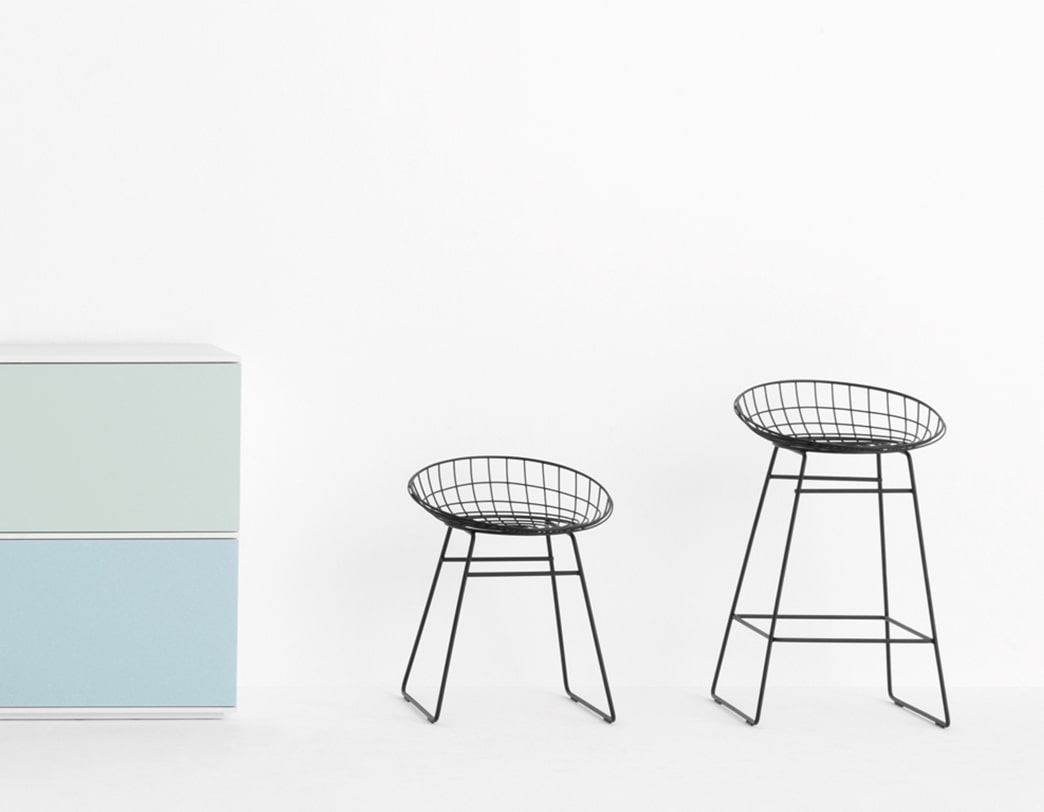 This Stool was released from the Wire Chair Series in 1958 by Cees Braakman, one of Netherlands’ most famous designers, after being influenced by the work of Charles and Ray Eames. It is characterized by a seat, which is composed of rippled circles and straight lines. 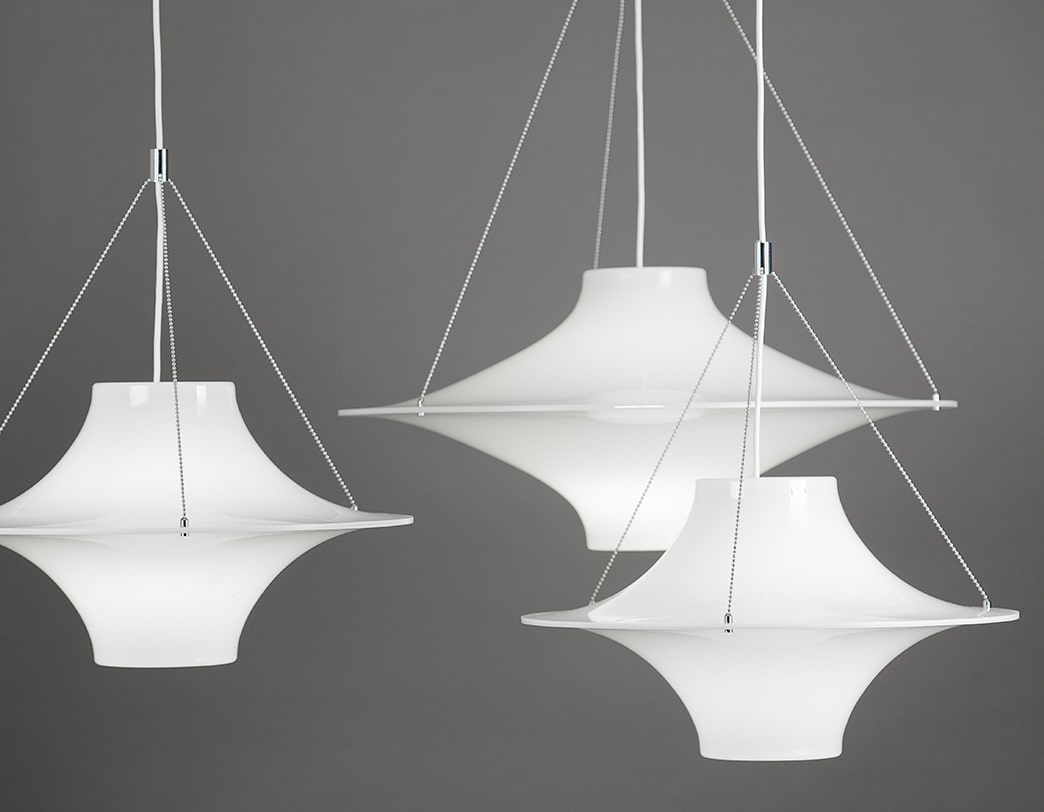 This pendant lamp combines two round acrylic shades at the top and bottom of the lamp. The soft light passing through the opaque acrylic creates smooth lines and a feeling of floating. 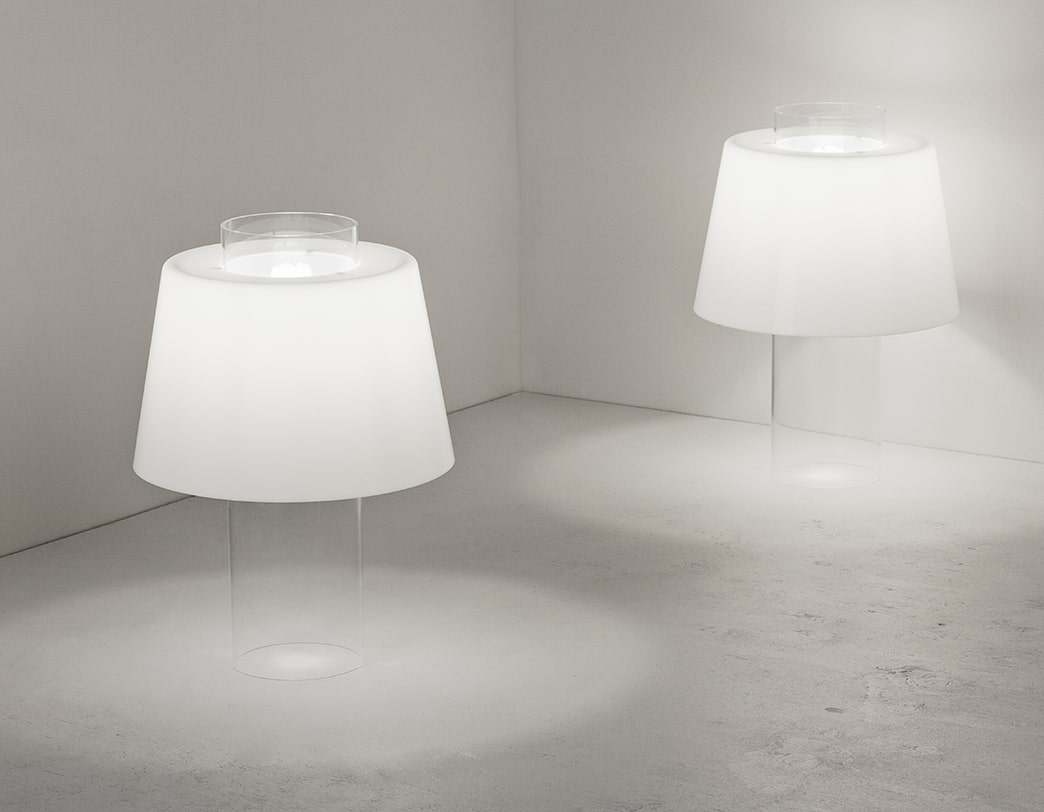 A featured piece by Yki Nummi dubbed “Modern Art” after being included in MoMA. A simple design that combines both transparent and opaque acrylic parts, when lit opaque shade appears as though it is floating in the air. 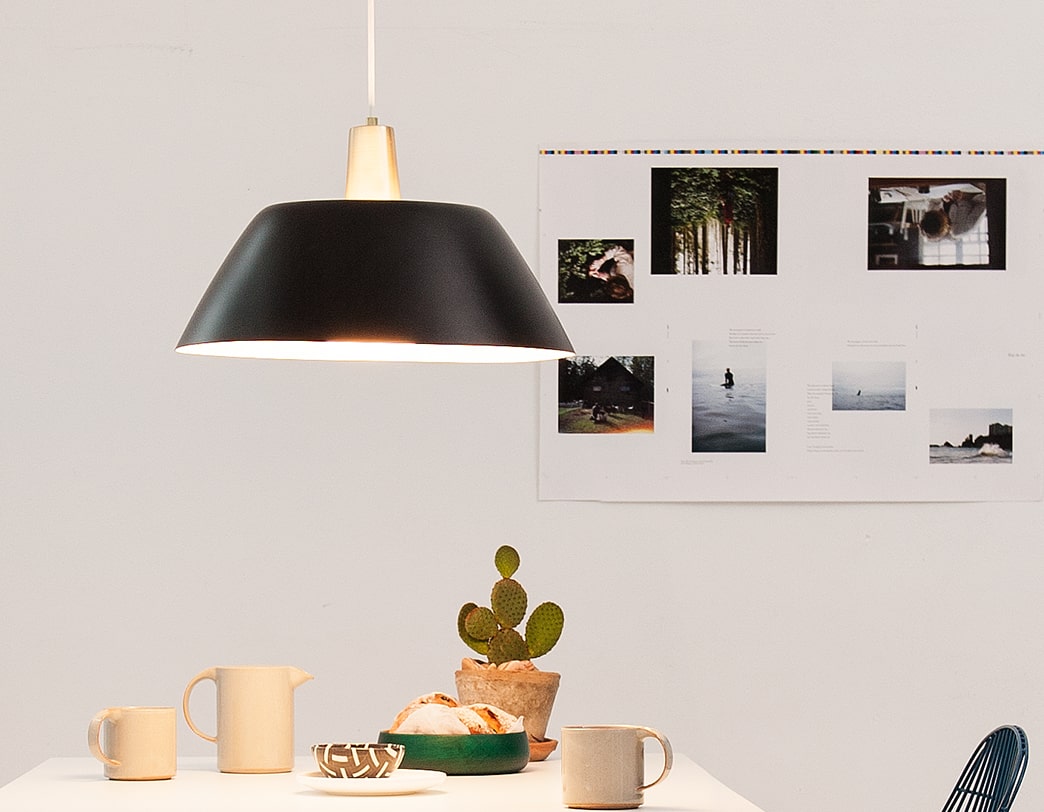 The name of this pendant lamp means “ideal” in Finnish. It is composed of a smooth-lined, aluminum shade and an acrylic cover over the light bulb. The white coating on the inside of the lamp shade evenly spreads the soft light. This superb article, representative of northern Europe, combines functionality and good design. 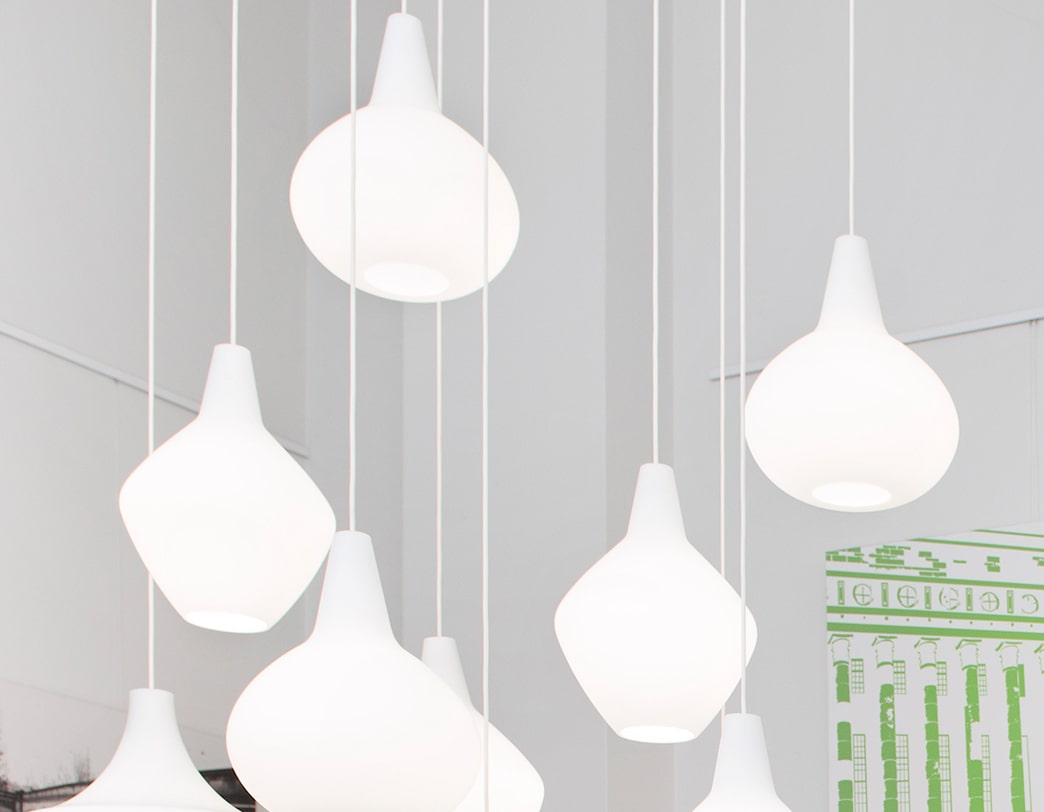 One of Lisa Johansson-Pape’s best-known works, famous for its organic form, this hand-blown glass shade emits a soft, gentle light. Sipuli received the first prize at Triennale di Milano in 1954. 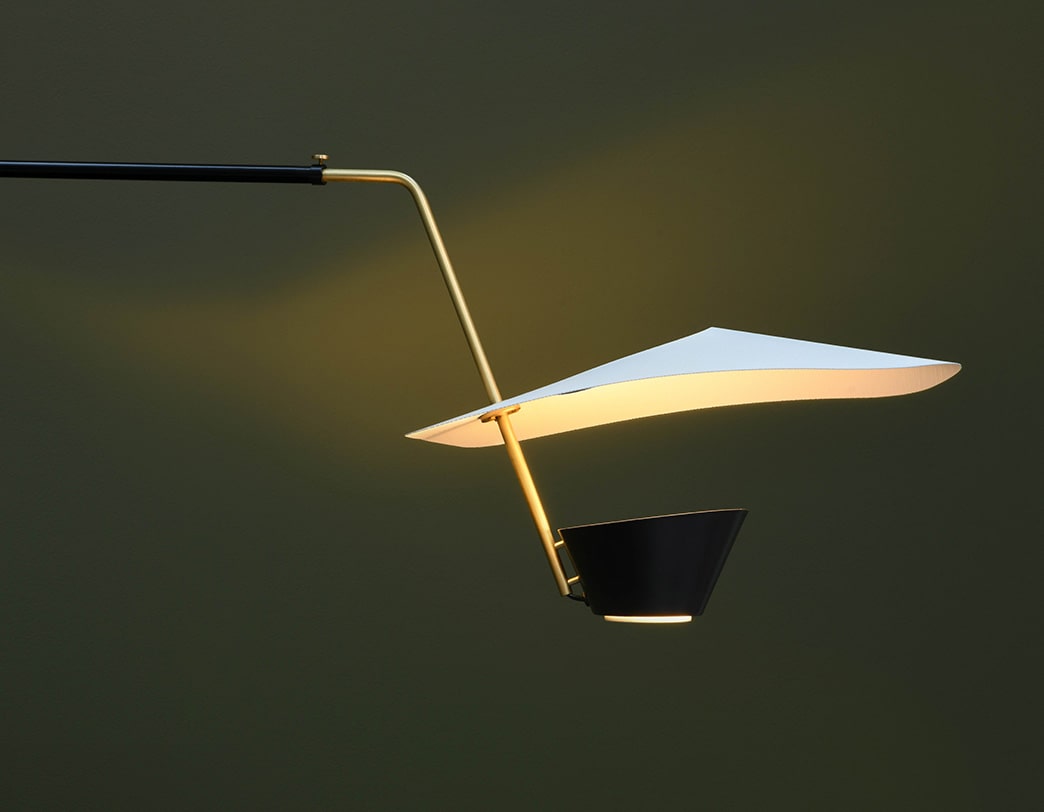 This wall lamp was designed in 1951 by representative French designer Pierre Guariche. The metal reflective plate diffuses light, producing an appropriate light quality. The length of the arm is adjustable. 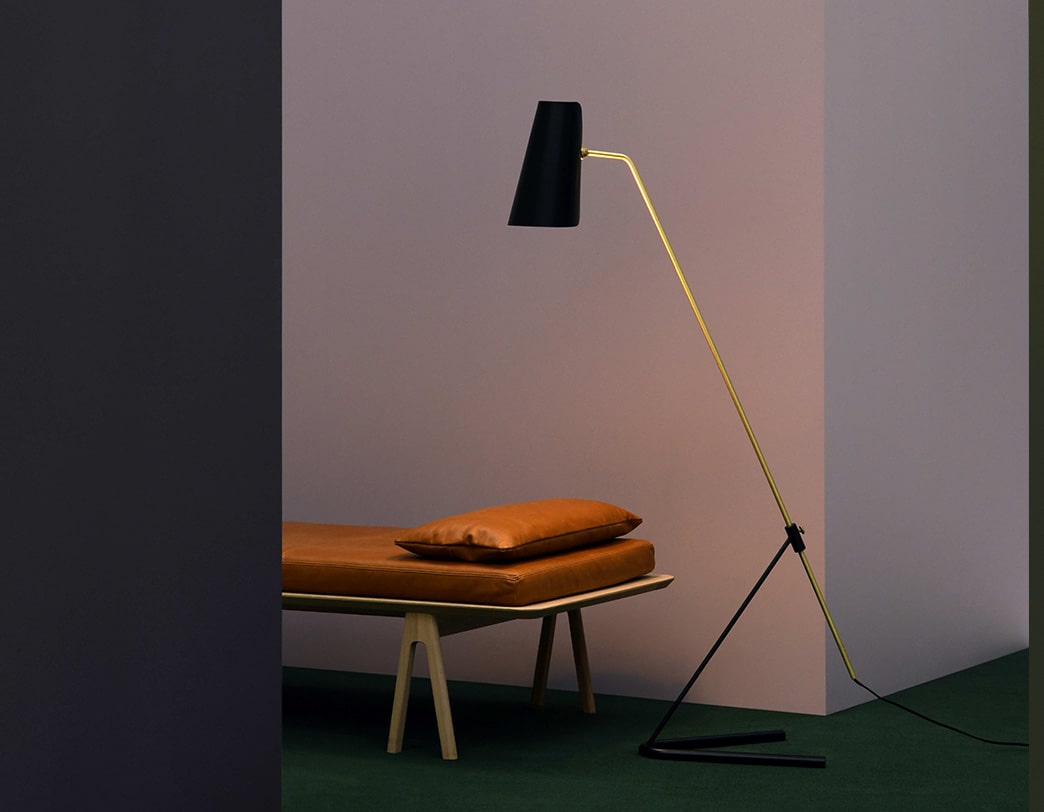 This floor lamp features a metal shade that directs the flow of light, protecting the eyes from the light source. The length of the stand can be adjusted to the optimal lamp height for the user. 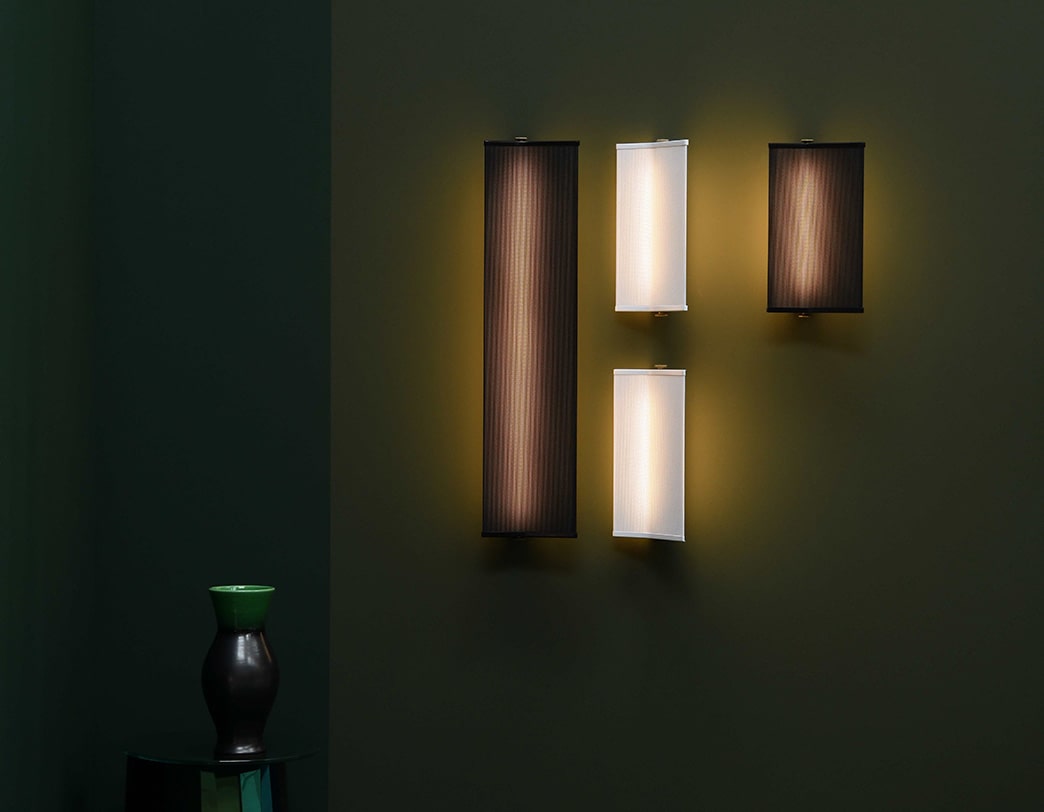 The lamp’s metal reflective plate diffuses light, producing an appropriate light quality. Multiple lamps can be arranged in combination on a wall as decoration. 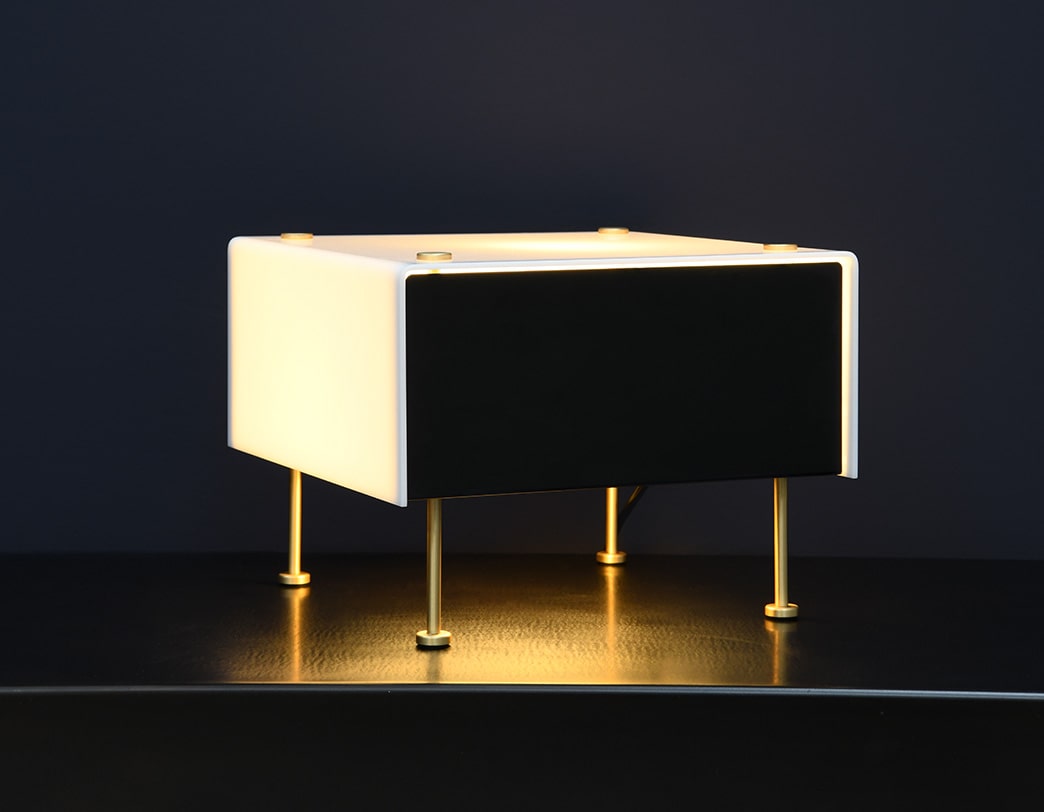 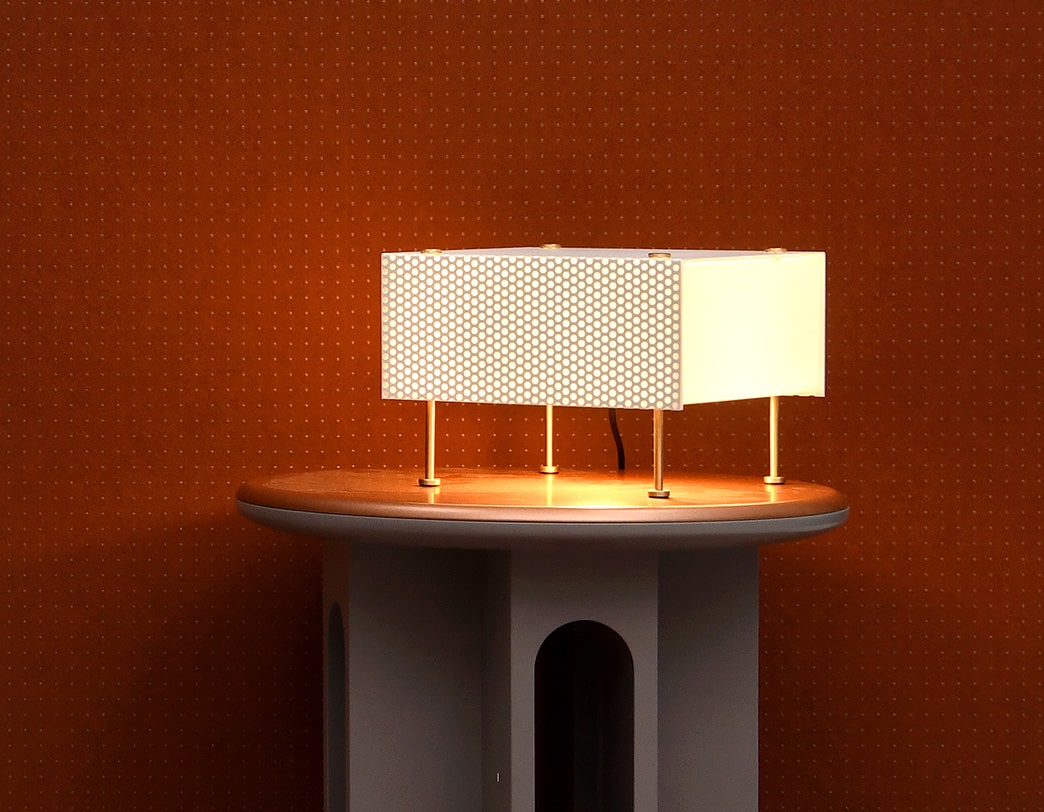 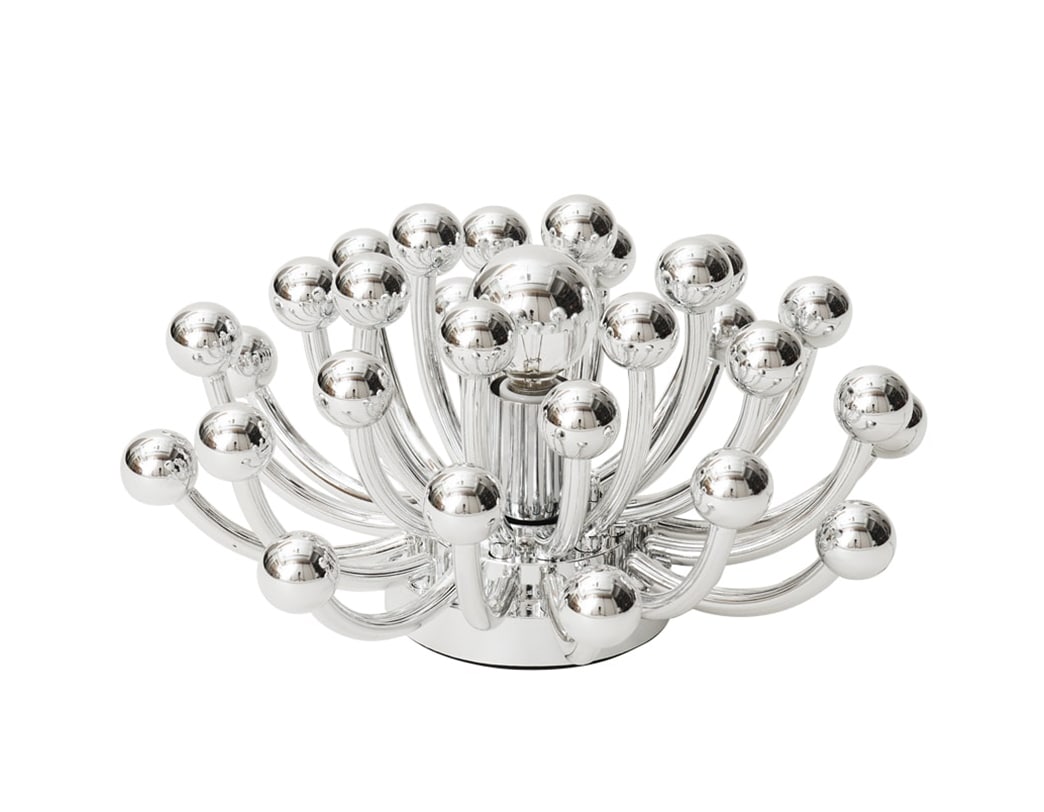 Pistillino means “pistil” in Italian and the word is now synonymous with this small classic lamp design. Multiple stems with rounded tips extend from a single shade, and the radial light creates a fantastical atmosphere. 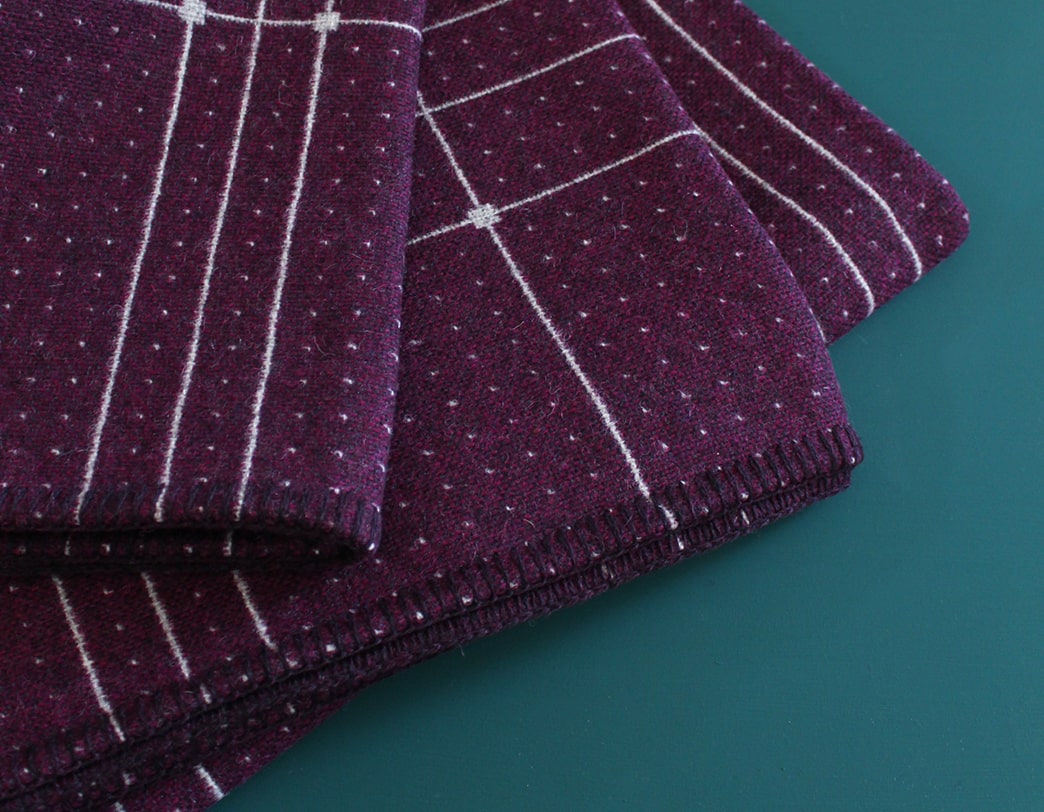 This blanket was designed by British textile designer Eleanor Pritchard specifically for METROCS. The “Densen” blanket was inspired by Japanese power lines and is characterized by a pattern of randomly appearing vertical lines and repeated horizontal lines.